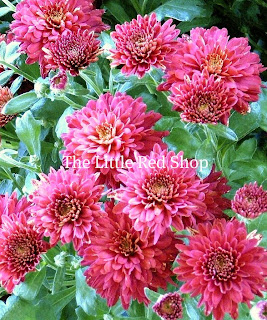 "Seal up your lips and give no words but mum." William Shakespeare, Henry VI, Part II

August was quite the month for treasure hunting...and some of my finds were quite unintentionally found. It began a couple of weeks ago when I went on a spontaneous garage sailin' expedition with my antique-dealer friend, Thelma. I didn't find much that day...but for $5.00, I purchased an ooold bed which had come out of a cabin several miles from my home. Then, whilst in town for an oil-change Friday night, at GW, I found a spindle-legged table, an easel, and a vintage child's glider amongst other sweet little things which I'll have to show you another day. Rather than garage sailin', I planned to work outside Saturday, and take two loads of yard waste to the dump. That was the plan...but we all know how those can change! There was a long line at the dump and I had to circle around twice with my varied load. During my second trip through the weigh-in booth....I realized that right before my eyes was a somewhat large pick-up truck full of furniture. I had already found a sweet little maple chair in nearly perfect condition and 1 antique ski...next to the construction waste pile (talk about waste...they don't recycle the building materials!!!!!) Anyway, back to the booth, I smiled at the dump dude and said, "I'm following him!!!!!" The wait continued up at the garbage disposal area, so I hopped out of my little truck and approached the hidden driver of the truck full of treasure. "It's too bad you didn't come sooner," he said. "I already dropped off one load and I feel so bad dumping this stuff...it belonged to my grandmother. We've been meaning to have a garage sale." So, rather than heading back home with an empty truck and hurrying to load and unload it with twigs and such before the dump closed...I spent the remainder of the dumptime window...loading up my little truck with more nice spindly chairs and other pieces of history. : ) I was leaving JUST as another dump dude was heading to close the gate for the day. He wagged his head and said, "I could have sworn it would take you two trips with all of that stuff! That's crazy!" I grinned and happily went on my way. Packing and parallel parking are two of my great gifts in life. (To even out that boast...I will let you know that you should never ask me to cut your hair or set up your sprinkler...I am virtually helpless when it comes to those endeavors! : ) 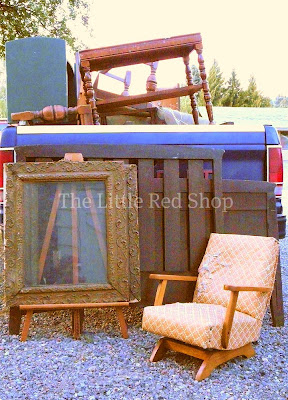 Whilst I was loading up the treasures...another nice man (who was dumping actual garbage) struck up a conversation with me. During which he said, "I saw a couple of antique frames over there..." pointing toward another pile. I headed on over..knowing that you are not supposed to actually pick things OUT OF the piles. "Are they plastic?" he asked...touching them. "No, they are wood and plaster." I replied as I smiled, grabbed them and headed for my truck. (shhh! Don't tell!) The nice man didn't want them.
Isn't the little chair darling? I found a grown-up version a couple of months ago. Do you think I should paint or re-stain the arms when I re-upholster it or leave them "as is?" 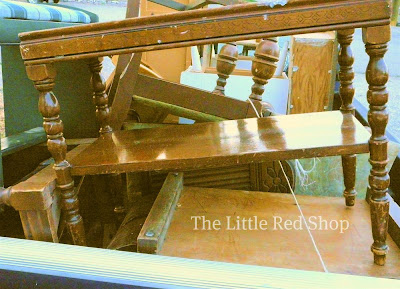 Can you see the rounded side of this old coffee table (below)? It's a little outside of my traditional style...do you think I should re-stain it a dark brown or black...or paint it a light cottagey color? 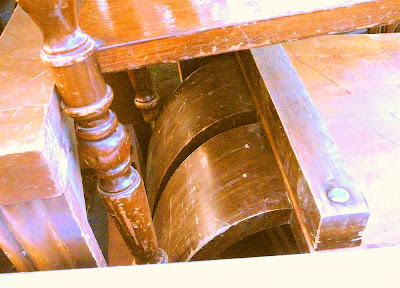 Found on its side in the cellar of the house we moved, the old french door will be the official greeter for my front porch....after much stripping and re-painting, of course. 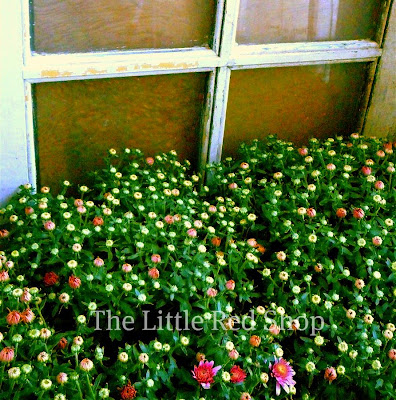 Saturday night, my mom surprised me with tons of mums. So, Sunday afternoon, I decided to have a little photo shoot featuring some of my new (old) treasures! 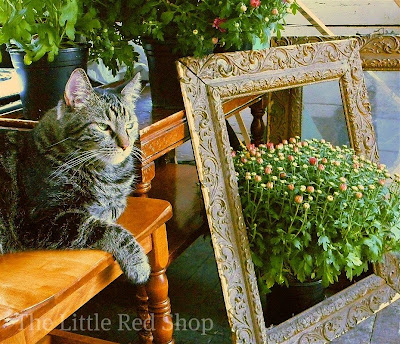 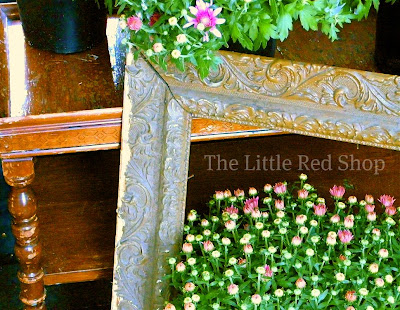 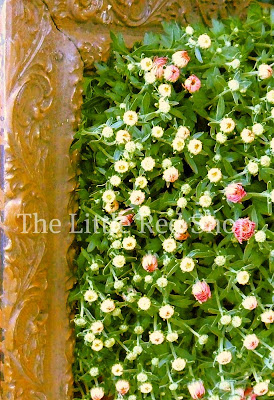 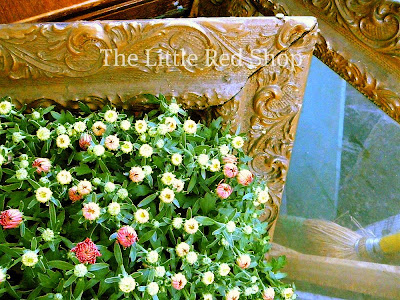 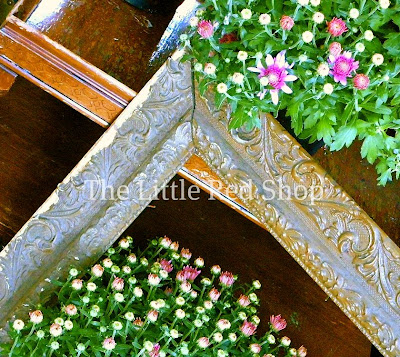 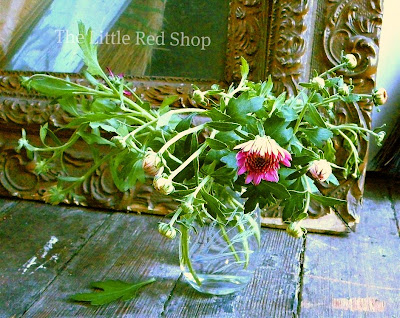 I placed a little bunch of stray mums in a juice glass which also came with the bungalow we moved. 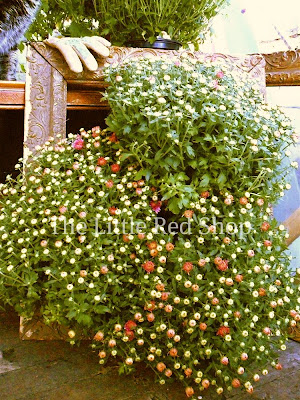 The day Thelma and I went yard sailin', I found a little something else on the side of the road...I'll tell you about THAT tomorrow! (Now..why did I promise that? Yesterday was tomorrow and it has grown very late! I will tell you when I can. : )
In the meantime, please visit Southern Hospitality to see more of Today's Thrifty Treasures!
Labels: Gardening History Just a Moment Treasure Hunting

Maggie said…
I'm so envious of the treasures that you found at the dump, I never find things like this at mine!!
a bientot
Maggie @Normandy Life
01 September, 2009 02:01

Unknown said…
OMG the frame is gorgeous! I think you had an amazingly productive day!!!

Pearl said…
I LOVE the easel! I can't wait until we can continue our adventures. :)

The Little Red Shop said…
I was definitely grinning from ear to ear!

Wendy @ Ramblings from the Sunshine State said…
That frame is gorgeous!

Alicia said…
OMgosh! I can't believe what great treasures you found at the dump. Especially those frames. I had to read your story to my mom because she laughs at me because everything is a treasure to me. Love your sweet kitty also.
01 September, 2009 19:04 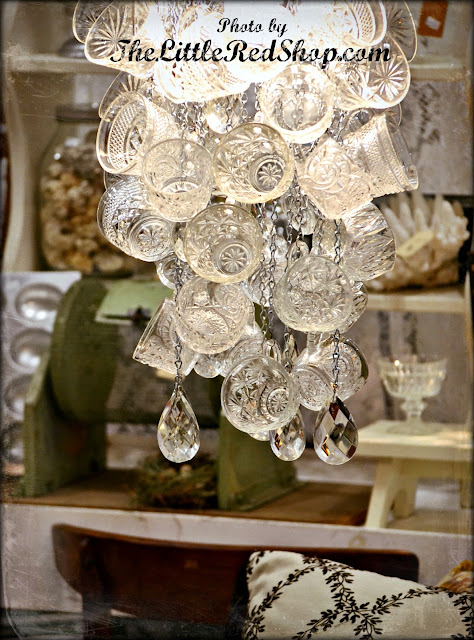 The Vintage Quarterly, Part I 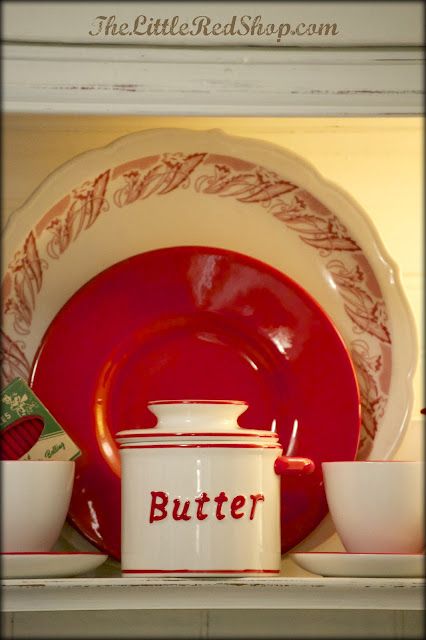 Vintage Farmhouse Kitchen ~ Before & After

The Little Red Shop
I am an artist, designer, and preservationist who lives to be a light for the Lord and to save old houses. A dumpster diving germ freak by trade and obsession, I love to take something neglected and turn it into something truly beautiful. Along with rearranging furniture and deconstructing 1960's "home improvements," going IN to Krispy Kreme instead of using the "drive-thru" is one of my favorite forms of exercise! Currently, I am restoring a 1910 Frankenstein of a farmhouse and a 1919 Craftsman Bungalow. Oh, and I have a tiny little shop that features vintage goodies and pretty new things for you, your home, and baby!

Featured on Television, via "Studio Five"